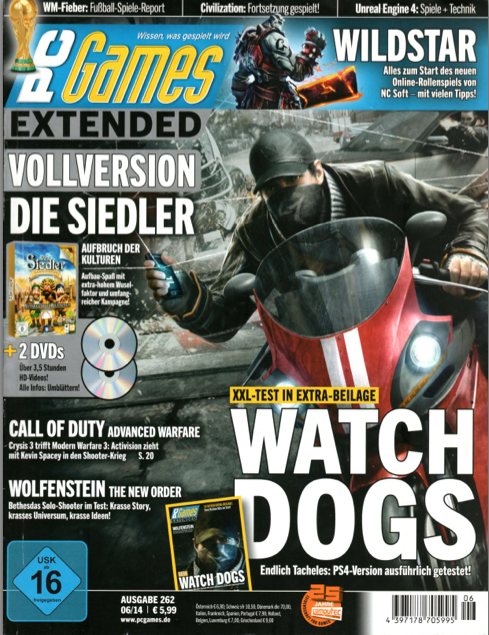 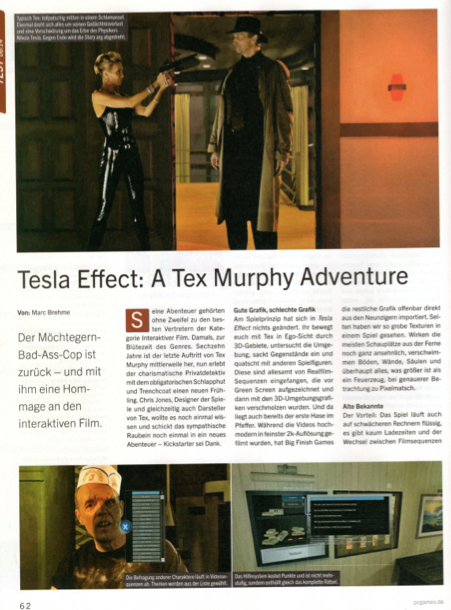 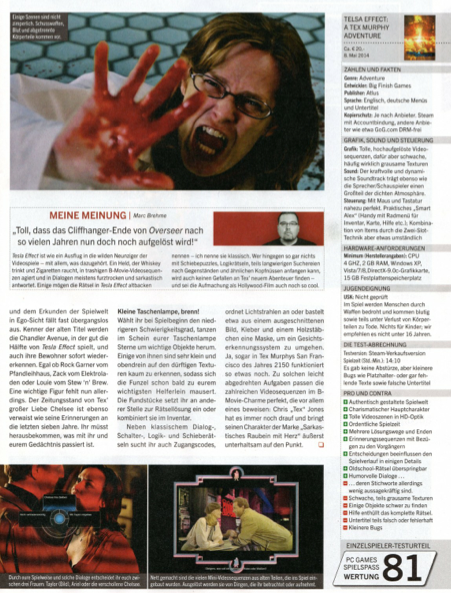 His adventures doubtless belong to the better representatives of the category interactive movie. Back then, in the heyday of the genre. Tex Murphy made his last appearance 16 years ago and now the private eye with the obligatory fedora and trench coat is experiencing a second spring. Chris Jones, designer of the games and Tex Murphy himself, wanted to bring the game back and sends the roughneck once more into a new adventure – thanks to Kickstarter.

Good graphics, bad graphics
The franchises’ basics haven’t changed for Tesla Effect. The player moves around with Tex through 3D environments, talks to other characters. These are full motion video moments that were filmed in a green-screen environment and then meshed with the 3D graphics. And there is the first fly in the ointment. Whilst the movie segments were filmed in hi-tech 2K resolution of the finest quality, Big Finish obviously imported the rest of the graphics straight from the 90s. Rarely have we seen such coarse pixelation in a game. Most of the scenery looks pretty good from afar but on closer inspection the floor, walls, columns and in fact anything larger that a lighter becomes pixelgoo.

Old acquaintance
The advantage: The game does run smoothly even on weaker computers, the loading times are short and the change between movie sequences and the virtual world is flawless. Those who know the franchise will immediately recognize Chandler Avenue (where approximately half of the game takes place) and its inhabitants. There is Rook and his Pawnshop, Zack from the Electronics Shop and Louie in his Stew ’n’ Brew (sic). An important figure is however missing from the street: the newspaper stand owned by Tex’ true love Chelsee is just as dilapidated as his memories of the last seven years. You, the player, will have to find out what happened to her and your memory.

Little flash light, burn
If you select the lower difficulty grade at the beginning of the game, you will get dancing sparkles around important objects when you shine your torch on them. Some of these are very small and into the bargain hardly recognizable on the definition lacking textures and the torch will prove to be your most important ally. The items you find you will be able to use at different locations or you can combine them in the inventory.
Apart from the classic dialog-, switch-, logic- and sliding puzzles you also look for access codes, arrange rays of light or assemble a mask out of a cut-out picture, glue and wooden stick. Yes, even in Tex Murphy’s San Francisco of the year 2150 (sic!!) you still resort to that kind of thing.
These quickly resolved tasks fit perfectly with the numerous movie sequences, which have that B-movie charm and which prove especially one thing: Chris Jones still has it and brings his entertaining “sarcastic roughneck with heart” character very nicely to life.
"When you lie down with dogs, you get up with fleas." Jean Harlow

The “Meine Meinung” (my opinion) box written by Marc Brehme

“Brilliant, the cliffhanger ending of Overseer is resolved after so many years.”

Tesla Effect is like a trip back to the wild 90s of the video game – with everything that goes with it. A hero that drinks bourbon and smokes cigarettes, appears in trashy B-movie sequences and whose dialogue is desert dry and sarcastic.

Some would like to call the puzzles in Tesla Effect old fashioned – I call them classic. For those who have absolutely no time for sliding or logic puzzles, sometimes drawn out searches for objects and similar brain teasers, Tex’ newest adventure will not be a mind changer, even if the feel of a Hollywood movie is really cool.
"When you lie down with dogs, you get up with fleas." Jean Harlow