Joel
1560
November 05, 2005 • 2:24 am
Melbourne, Australia.
April 06, 2014 • 7:38 pm
I appreciate that this guy is a fan and is helping to generate interest in Tex Murphy, but this guy sucks when it comes to gameplay! He's spent the last 5 minutes reading the hint system and it only looks as though he is on day one. Really? I can't wait to see his reaction to the shuttle puzzle.

Joel wrote:I appreciate that this guy is a fan and is helping to generate interest in Tex Murphy, but this guy sucks when it comes to gameplay! He's spent the last 5 minutes reading the hint system and it only looks as though he is on day one. Really? I can't wait to see his reaction to the shuttle puzzle.

I think thats a plus about Tex Murphy, that the Hint system is available in-game.

At the start they were unfamiliar with where certain people were located and was trying out the Hint system to see if it tipped you off (since it's not outright answers) or using it as an Objective reminder. But they did just dig around for things and experiment.

Later on he setup a second webcam to show himself working out some of the puzzles with a pen and paper. They do actually like puzzles and will take the time to work them out (making sure the chat is in restricted mode because impatient folks will just yell walkthrough answers to get him to move on). I suck at puzzles and usually played in Entertainment Mode myself where you don't *have* to solve the puzzles so he's definitely more hardcore than me in that respect.

I really do think Tex Murphy is great because it allows for different styles of play. I love the interactions/exploration side of adventure games but not really a big fan of some of the puzzles..... I'm looking at you Black Dahlia.

Funnily enough I did find out about the Tex Murphy Kickstarter through his stream. I was out of the loop here for awhile, but regularly watch gamers on Twitch for the funny commentary.
(Ruri_Ayanami from the old Tex Murphy ezboard).
"I don't believe in intuition, don't know why... just a feeling." - Tex Murphy
TexMex
85
June 13, 2005 • 8:37 am
April 08, 2014 • 7:09 am
I watched for a while. He was bored with the game, insulted the simplest puzzles, started mocking it for not having any AA, or VSync, and really did spend more time with the hint system than with the game. I laughed, saw it costed 5 dollars to subscribe to his channel, laughed again, and stopped watching.

Sai
2027
June 04, 2005 • 8:15 am
England
April 08, 2014 • 11:49 am
I understand but I found the 2000+ people in chat were the ones being brutal about lack of AA / VSync, he was mostly responding to them when saying the game was released before those were even a thing. He was more often mocking that people were expecting a modern game e.g. he was sometimes responding with:


This is an XBox One game, it's really REALLY pushing the system though, it's barely running at 720p and it's really struggling, it's getting really hot trying to do this

Later as more chat comments brought up how old it looked he went:

Oh no this is a brand new game that just came out just a few days ago. It's an XBOX One exclusive, it's actually maxing out the power of the Xbox One, it's the first game to do that. And so far it's pretty good. Like... you can even use Kinect commands. Uh... 'Kinect! Interface!" (*secretly pushes keyboard key*) See? Like magic. 'Kinect! Explore!" (*presses to go back to environment mode*). See it works great.

He enjoyed Gabriel Knight 2, Phantasmagoria 1 etc. so old graphics aren't a problem. It was actually a different game he got bored with so switched to Pandora Directive saying:

I'm liking this game, this is probably one of the best FMV games I've played so far, it's actually pretty decent.

Oh wait, one diagonal row? OK this is going to be... I need paper for this. I have to actually think and apply myself, this is like a real puzzle, not like a modern one. A modern day puzzle in games would be like 'Which of the squares is purple? Is it the purple square? Is it the blue square...? Or is it the purple purple THIS ONE square? You selected the purple square. YAAAY *clapping* Achievement! You win the game! Good job! *starts to talk like he's talking to a dog* You're such a good gamer! You're so good! You're so good at gaming! Yes you are!'

They got frustrated with the old controls on some puzzles but he did the shuttle one within a few minutes (people in chat were like "was that it?"), swings and roundabouts I guess....

I do think the Hint system in Tex Murphy is one of its greatest elements, most the time they referred to it as a current objectives reminder e.g. "Get into the Evidence Room". It's a handy little thing.

But yeah some criticisms amongst the compliments. However I'll save you the horrors of knowing what the comments devoid of compliment were in the chat... However I also saw some really nice comments too from people who will be checking out the older games or the upcoming new one based on the playthrough.

(Oh the $5 is set by Twitch.tv rather than the broadcaster as an optional alternative to having ads on the site, I just let ads run personally, similar to supporting Youtubers).
(Ruri_Ayanami from the old Tex Murphy ezboard).
"I don't believe in intuition, don't know why... just a feeling." - Tex Murphy

Thanks for sharing such a hilarious snapshot Cubase! And hey Jen 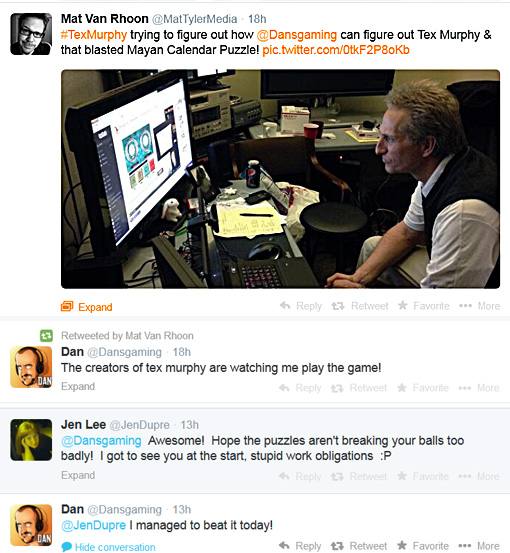 (Ruri_Ayanami from the old Tex Murphy ezboard).
"I don't believe in intuition, don't know why... just a feeling." - Tex Murphy